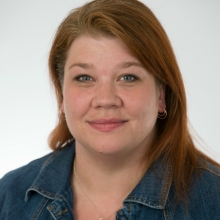 Elin Grissom, Ph.D., enjoys engaging students both in the classroom and in research settings, training students in techniques in psychological, behavioral, and neuroscientific research.

Dr. Grissom received her B.A. in Psychology from Eastern Illinois University in 2006, followed by an M.S. in Experimental Psychology from Indiana State University in 2008. She received her Ph.D. in Psychology with a concentration in Behavioral Neuroscience from Tulane University in 2013 where she remained to complete her postdoctoral training in Behavioral Neuroendocrinology.  She was appointed as a BIRCWH scholar in 2015 and held a position as a research assistant professor at Tulane where she was supported by the National Institutes of Health.  In 2013, she was honored to receive the C. Chrisman Wilson Memorial Graduate Teaching Award from Tulane University.

Dr. Grissom’s research background includes published work with both humans and rodents, though her primary focus is in basic and translational research using rat models.  She is currently interested in the sex-specific impact of stress and gonadal hormone exposure during early life on the interaction between learning style and emotionality.  She investigates these endpoints using a rat model to examine behavior and corresponding changes in the hippocampus, amygdala and other components of the limbic system.  Dr. Grissom has also published in the area of sexual behavior and stress and is further interested in sex differences in the brain in a rodent model of post-traumatic stress disorder. Her work with humans includes published work studying saccadic eye movement during REM sleep in children with Attention-Deficit Hyperactivity Disorder.