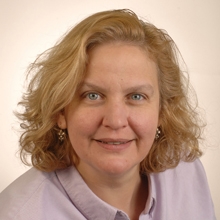 Professor Calzada joined the Loyola University New Orleans faculty in the fall of 1991. She became Dean of the College of Sciences and Natural History in 2013, and Interim Provost in 2018. Her research interests include mathematical computations with an emphasis on applications in statistical quality control.  She also enjoys working on teaching projects in collaboration with faculty in her department and the natural sciences. Her teaching interests include all levels of undergraduate mathematics, but she has a special affinity for freshman level calculus. She hopes that college students will learn, understand, enjoy and use calculus as a base for deeper mathematical and scientific explorations. In 2008, she received a National Science Foundation grant to pursue interdisciplinary studies in the Loyola Chemistry Department. As a result of that grant, Dr. Calzada continues to pursue interdisciplinary research on Spectroscopy topics together with Chemistry faculty and undergraduate student researchers.

Mathematical Computations With an Emphasis on Applications in Statistical Quality Control