The Intentional Troubadour: Woody Guthrie's Travels Through the Twentieth Century 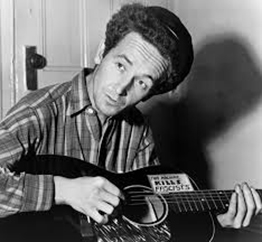 Woody Guthrie bore witness to most of the significant historical changes of the twentieth century. Born in 1912 in Okemah, Oklahoma, he entered a world where most people got around on foot or on horseback. His parents, Charley and Nora Belle, however, brought the first automobile to the tiny western town launching Guthrie along the way to becoming, like most Americans of the century, a fully mobile human being. By the end of his life Guthrie had travelled on just about every type of conveyance available from the horse and buggy to the airplane. Through his art, his songwriting, poetry, narrative prose, fiction, drawings, and paintings, Guthrie chronicled this history in some of the most memorable imagery in the history of American art. What child raised in the United States hasn't sung those memorable words about the "redwood forests" and the "gulfstream waters" in school or camp? Guthrie's approach to his art is best described in his own motto "All you can write is what you see." And he saw everything. As a young man in the 1930s, Guthrie, like many residents of the Great Dustbowl, pulled up stakes and travelled around the country like any good hobo searching for opportunities and honing his songwriting and musical skills. He walked, hitch hiked, and hopped trains weaving his way through the highways and byways of a rapidly changing country. When World War II broke out he shipped out with the Merchant Marine for several tours crossing the Atlantic in an adventure that brought him to the beachheads of Africa, Italy, France, and the British Isles. He was drafted in 1945 and served the final months of the war in the United States Army Air  Corps, the precursor to the United States Air Force. His wanderings allowed him to visit all of the lower forty-eight, Europe, and Africa. And he wrote about what he saw. Guthrie's collection at the Woody Guthrie Center in Tulsa, Oklahoma alone contains over ten thousand manuscript pages of his writing including drafts of plays, novels, works of art, and the lyrics to over three thousand songs. I am mining this and other archival sources to write a history of the United States through the latter twentieth century using Guthrie's lens to look out on the people, places, political, historical, and technological changes that he witnessed firsthand and chronicled in his art. My research also includes interdisciplinary analyses of his art, and the how the themes of movement, motion, and travel infused his work and made it one of the best historical representations of twentieth-century America. From his writings about
hobos, Dustbowl refugees, workers, unions, and the vast vistas "From California to the New York Island" Guthrie's songs, poems, novels, opinion columns, drawings, and paintings depict an America (indeed a world) in transition.  Generous support from the College of Humanities and Natural Sciences, Loyola's Marquette Fellowship, and the Woody Guthrie/BMI Foundation Fellowship has allowed me to begin this painstaking research. Support from the Loyola University Collaborative Scholarship Fellowship, a joint effort between the College and the University Honors Program has allowed me to invite students to collaborate with me own my project and,
in one instance, develop their own. Continued support from the O'Keefe Professorship will allow that work to continue.