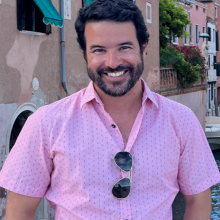 Dr. Tiago Fernandes Maranhão is a Brazilian historian working on the social, political, and racial aspects of Modern Latin America, public health, and the history of physical education and sports. Before earning a Ph.D. from Vanderbilt University, Dr. Maranhão worked as a college professor in Brazil for several years. After concluding his doctorate, he worked as a postdoctoral faculty fellow at the Tougaloo College (HBCU), in Mississippi, and as a Lecturer I at the University of Michigan.

Dr. Maranhão is currently working on his book manuscript, tentatively titled Molding the Body, Forging the Nation: Race, Physical Culture, and the Shaping of Brazil (1822-1930), where he examines how nineteenth and twentieth-century Brazilian policy makers and scientists understood that the discipline of body through physical education could be a key tool in their efforts to build a new, "modern" nation. His work intends to analyze the key role played by eugenics and biotypology as well as their mechanisms of cohesion with political projects and the impact physical culture had on the debates that sought to construct the Brazilian body politic.

Dr. Maranhão also co-coordinates the Transatlantic Bodies Project, a Digital Humanities initiative connecting the histories of the human body with the political, cultural, and intellectual knowledge developed in Brazil within the Atlantic World during the nineteenth and early twentieth centuries, intending to animate broad reflections on the contingencies of biopower, public health, nationhood, and race. The first phase of the Transatlantic Bodies Project was fully funded by the Mellon Partner in Humanities Education Program, an Andrew W. Mellon Foundation research grant.