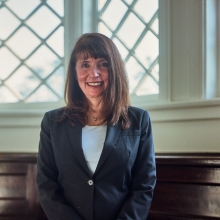 Patricia Boyett is the Director of the Women’s Resource Center (WRC) and a Visiting Assistant Professor of History. Prior to her career in academia, she worked in media, theatre, and film. She began teaching for the Department of History at Loyola in 2012, and in August 2015, she assumed the position of the Director of the WRC.

Dr. Boyett is the co-chair of the Women’s Studies Interdisciplinary Minor and the chair of the Take Back the Night New Orleans Committee. She is a member of the African and African American Studies Committee, the Diversity Equity and Inclusion Committee, and the Women’s Studies Committee. She is also the faculty advisor for Women in Politics, Students Against Sexual Assault, and Feminist Fridays.

Dr. Boyett works with thirty-five to forty student staff members each year at the WRC. The WRC publishes The Feminist Forum magazine, produces the At The Intersection IGTV show, engages in advocacy and leadership campaigns for the empowerment of women, and hosts large-scale events like the center’s annual Feminist Festival, Take Back the Night, the Women’s Filmmaker Competition & Showcase, and the Women’s Leadership Networking Evening.

At the core of her teaching philosophy is her conviction that all students have limitless potential to thrive when provided equal tools and opportunities and that they become more invested in courses when they relate to the material. In her efforts to achieve those ends, Dr. Boyett employs an interdisciplinary and student-centered pedagogy. She incorporates music, film, trial transcripts, and literary excerpts into lectures and class assignments, hosts writing workshops, and offers opportunities for experiential learning, class debates, class trivia, and creative project development.

A History of Modern Terrorism

Dr. Boyett’s research centers on African American History and Intersectional Feminism. Her book, Right to Revolt: The Crusade for Racial Justice in Mississippi’s Central Piney Woods (University Press of Mississippi, December 2015), argues that the region served as the epicenter of the Black Freedom Struggle and the massive resistance counterrevolution and became one of the most tortuous and transformative landscapes in America. Right to Revolt was the recipient of the Eudora Welty Prize (2016). Several fellowships, including an award from Rand Institute supported her research. Currently, she is working on a manuscript, “After the Revolt,” which examines the struggle for racial justice that has persisted in the Central Piney Woods long after the Civil Rights Movement. She is also working on a historical fiction set against the backdrop of the civil rights and women’s rights movements in America.