Chair of the Department of History; Patricia Carlin O'Keefe Distinguished Professor of History 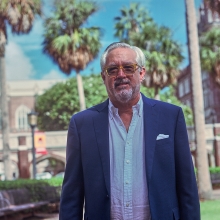 Mark F. Fernandez is the Patricia Carlin O'Keefe Distinguished Professor of History at Loyola. A native New Orleanian, he received his B.A. and M.A. Degrees from the University of New Orleans and his Ph.D. from The College of William and Mary in Virginia. He came to Loyola in 1992 after teaching at what is now Texas State University from 1990-1992. Fernandez was promoted to associate professor in 1997 and Professor in 2007. Fernandez teaches courses on early America, the South, the West, the American hero, and American folk culture. The Loyola Student Alumni Association has twice recognized Dr. Fernandez for meritorious teaching. He has published on topics ranging from the seventeenth-century Chesapeake to the history of law in antebellum South. His notable scholarly activities include A Law Unto Itself? Essays in the New Louisiana Legal History, (Louisiana State University Press, 2001) and From Chaos to Continuity: Evolution of Louisiana's Judicial System, 1712-1862, (Louisiana University Press, 2001, 2014) which won the Louisiana Literary Award from the Louisiana Library Association. He also served as Guest Editor with Jon Kukla for the Journal of the West's special Louisiana Purchase edition which appeared in 2004. In 1993 and 1997, Fernandez received grants from the Louisiana Endowment for the Humanities to direct Summer Institutes for Teachers; in 1998 he received a Commendation from the American Association for State and Local History for his 1997 Summer Institute, "New Orleans through Its Sources." In 1999, Dr. Fernandez received the Louisiana Endowment for the Humanities Special Humanities Awards for his work with the summer institutes. He is past president of the Louisiana Historical Association and a member of the Board of the Tennessee Williams New Orleans Literary Festival. In recent years his research interests have turned to exploring the life of American folk icon, Woody Guthrie. In 2012, he was named the Seventh Annual Woody Guthrie Fellow by the Woody Guthrie Foundation and BMI Music Publishers.

History of the Old South

History of Law in the Antebellum South