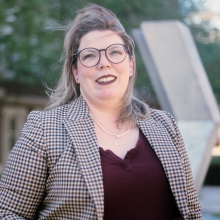 Dr. Lauren Doughty completed her PhD in Medieval History at Louisiana State University in 2017. Specializing in Anglo-Scandinavian history during the ninth through eleventh centuries, Dr. Doughty also minored in ancient World History with a concentration in African and Chinese studies. A prolific conference presenter, Dr. Doughty has spoken on her specialty including royal authority, female power and noble accommodation in both the U.S. and U.K. Currently working on an article on the complexities of the tenth century West Saxon court, Dr. Doughty will be presenting at the International Congress of Medieval Studies at the University of Michigan in May 2022. Dr. Doughty began her teaching career at Loyola in 2012 and continues to thrive in the classroom setting.