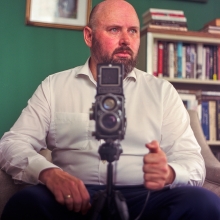 Dr. Justin A. Nystrom is the Rev. James J. Pillar, O.M.I. Distinguished Professor in the History Department at Loyola University New Orleans. He is the author of New Orleans after the Civil War: Race, Politics, and a New Birth of Freedom (Johns Hopkins, 2010) and Creole Italian: Sicilian Immigrants and the Shaping of New Orleans Food Culture (Univ. of Georgia Press, 2018), which was nominated for a 2019 James Beard Foundation Award in the Scholarship and Reference category. He has published extensively about the history of New Orleans and the South on topics ranging from the Civil War and Reconstruction, racial identity, labor history, foodways, and cultural history. Nystrom also produces documentary films, including a feature length film titled This Haus of Memories (2012). Nystrom is working on a new project exploring the transformation of the way America eats in the 1980s and also on a longer term effort looking at craft food production in Brexit-era Britain.

At Loyola, Nystrom teaches Southern History, Civil War and Reconstruction, New Orleans History, Foodways, Documentary and Oral History, and the Historiography seminar. He also regularly teaches in Loyola’s innovative interdisciplinary First Year Seminar program, most recently offering a course titled “History on the New Orleans Landscape.” He is the founding director of of the Documentary and Oral History Studio, which he founded as a unit of the History Department in 2012. As director, he has overseen the collection of over 100 hours of filmed and transcribed interviews with subjects ranging from restaurateurs, independent musicians, longshoremen, significant political and cultural figures in New Orleans, and numerous other individuals from a broad spectrum of society. From 2012 to 2019 he was the director of Loyola’s Center for the Study of New Orleans.