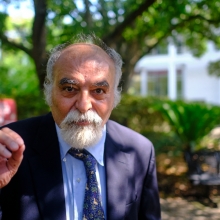 For nearly two decades before joining academia, Moazami was a professional political activist and contributed to a number of Iranian dissident publications. He co-founded and co-edited Andisheye Rahai a Persian review on politics, theory, and society while living in Paris in exile (1983-1992).

His book State, Religion, and Revolution, 1796 to the Present (Palgrave-MacMillan, New York, London, 2013) challenges basic assumptions about recent Iranian history and constructs a new synthesis of the history of state and religion in Iran from 1796 to the present. Arguing that the 1979 revolution has not ended, he relates political and religious transformations in Iran to the larger instability of the Middle East region and concludes that turmoil will continue until a new regional configuration evolves.

Currently a Visiting Scholar at the Center for European and Mediterranean Studies at NYU in his sabbatical year (2014-2015), Moazami is simultaneously working on two different projects: exploring further on state formation and state theory by explaining and expanding on the Euro-Asian state formation, and problematizing the notion of “identity” and “identity formation” in social and historical analysis, and in everyday life and politics. All the while he continues dreaming about and conspiring to promote peace and democracy in the Middle East.

Dr. Moazami is a Trustee of the Ardeshir Mohassess Trust formed to preserve the legacy of the artist and to help other disabled artists in need. Moazami as the friend of late Ardeshir and a Trustee has helped organizing an academic conference and an exhibition at NYU (2010), facilitated production of the documentary, Ardeshir Mohassess: The Rebellious Artist, an IFVC Production, New York (2013) and an exhibition at Art Dubai (2014).

Violence in the Middle East: Political or Religious?

Fundamentals of Conflict and Peace, co-taught with Prof C. Wessinger.

Iranian history and politics: state formation and institutionalization of religion, and Islamic revivalist movements since the nineteenth century.

State formation in Europe since the nineteenth century: state theory, and European integration.