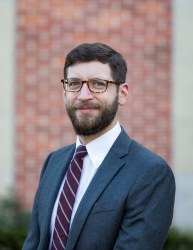 Dr. Garrett Fontenot graduated from Loyola University New Orleans in 2012. He was always interested in studying History, and chose Loyola after touring college campuses and finding the feeling of home here on campus. After finishing his Bachelor’s degree, Dr. Fontenot went on to Notre Dame University to get both his Masters in History and Ph.D where he researched eighteenth century French North America. While conducting his research, Dr. Fontenot received a Fulbright Scholarship and did research in Montreal.

Currently Dr. Fontenot works at Louisiana State University in the Honors College. There he helps with recruiting and advising the top candidates. He also advises students for international fellowships, such as the Fulbright, and other top awards. Dr. Fontenot occasionally teaches an interdisciplinary critical analysis honors course that takes different themes. On his path to LSU he worked in development at Notre Dame and next door at Tulane in their Honors program. Dr. Fontenot said that he knew he wanted to work in academia, but didn’t want to get a tenure track position at a university and end up hating it there. Plus, he knew he wanted to return to his home state of Louisiana.

“Invaluable.” That’s the word Dr. Fontenot used to describe how his History background assists him in his current position. He said that when looking through applications, you often only see snapshots of people and his History degree gives him guidance in taking that limited information and forming opinions on applicants. His degree in History aids him in filling in missing details by viewing the person critically and stepping back and seeing the bigger picture of the person. He said that although he got his Ph.D out of passion, that he felt Loyola’s History department set him up for success in his research.

Dr. Fontenot spoke on how his time at a Jesuit institution has impacted his life. He said that it is part of what kept him here at Loyola, and that he finds it critical to what he does today. He said that it has helped him to lead students applying for top research opportunities, by encouraging them to view the whole self critically and thinking of the world holistically. Dr. Fontenot said of his time here at Loyola, that it gave him the opportunity to do things he never pictured himself doing. While here he studied abroad, joined SGA and observed how universities and their administrations function, worked on the Maroon giving him experience with writing and editing, and served as an RA taking in how to relate to others, resolve conflict, and problem solve. Through these opportunities and more at Loyola, Dr. Fontenot learned how to connect with people and step in their shoes. He said that the diverse opinions here on campus allowed him to grow to see the world differently.