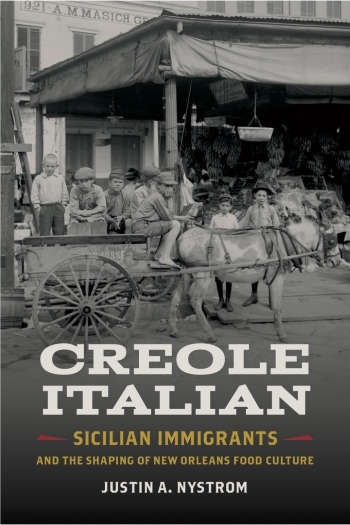 In Creole Italian: How Sicilian Immigrants Shaped the Culture of America’s Most Interesting Food Town,  Dr. Justin Nystrom explores the influence Sicilian immigrants have had on New Orleans foodways. His culinary journey follows these immigrants from their first impressions on Louisiana food culture in teh mid-1830's and along their path until the 1970's. Each chapter touches on events that involved Sicilian immigrants and the relevancy of their lives and impact on New Orleans. Sicilian immigrants cut sugarcane, sold groceries, ran truck farms, operated bars and restaurants, and manufactured pasta. Citing these cultural confluences, Nystrom posits that the significance of Sicilian influence on New Orleans foodways traditionally has been undervalued and instead should be included, along with African, French, and Spanish cuisine, in the broad definition of "creole."

Creole Italian chronicles how the business of food, broadly conceived, dictated the reasoning, means, and outcomes for a large portion of the nearly forty thousand Sicilian immigrants who entered America through the port of New Orleans in the nineteenth and early twentieth centuries and how their actions and those of their descendants helped shape the food town we know today.

Read about the book

Watch a video of Dr. Nystrom make a spaghetti and meatballs while talking about Creole Italian history