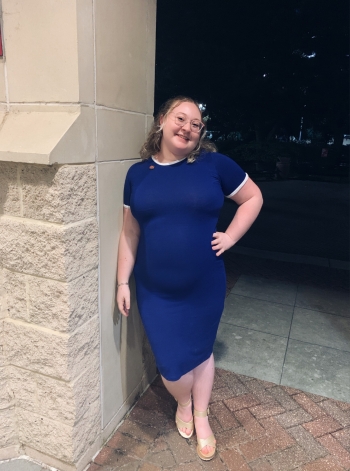 Analene McCullough was the recipient of the Senior Thesis Project award from the Monroe Library Student Research Competition. Her thesis was titled The Students for A Democratic Society and the Weather Underground: Transition to Violence, which examines Students for a Democratic Society, a movement of progressive young people from the 1960s, and how it transformed into a radical and violent group targeted by the FBI. Department chair, Dr. Mark Fernandez, advised her through the process of writing her thesis. Analene describes this as a passion project saying, "This developed out of a final project for a class but became genuine interest in the ways in which college students of the 1960s transformed the progressive and leftists movement, and their continued influence today." On winning the award she says, "I was shocked and proud that all of my hard work was validated." Analene spoke on the History Department's influence by saying, "All of my History classes at Loyola built upon the skills I needed to successfully accomplish a project this size, especially under the guidance of Drs. Fernandez, Nystrom, and Wallace." Dr. Fernandez says that he's proud but unsurprised by her accomplishment.

The History Department congratulates Analene on her win and wishes her luck as she goes on to pursue a Master of Library and Information Science at the  University of Alabama.