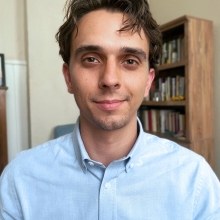 Simon Whedbee received his BA in English Literature from Loyola University New Orleans, with minors in Classics and Medieval Studies. He studied Medieval Latin and Latin paleography at the Centre for Medieval Studies at the University of Toronto, where he earned his MA and will soon (fall 2021) defend his doctoral dissertation, “Peter Comestor’s Lectures on the Gospel of Luke and its Glosses (c. 1163-8): A Critical Edition and Study.”

During his years in Toronto, he taught or assisted in teaching courses on Latin, medieval paleography and codicology, and the study of the Bible in medieval Europe. His current research investigates the impact of reading strategies cultivated in the Greco-Roman practice of ars grammatica (formal grammar) on the medieval practice of sacra pagina (study of the Bible). His ongoing research projects also include editing a twelfth-century commentary on Virgil’s Georgics attributed to Hilarius of Orléans.

Medieval Studies, Latin, Latin paleography, and The Study of the Bible in Medieval Europe