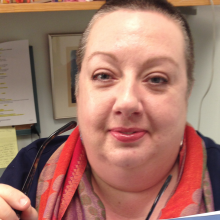 Karen Rosenbecker received a B.A. in Greek and Ancient History from the University of Minnesota and M.A. and Ph.D. in Classics from the University of Pittsburgh. She teaches Greek and Latin at all levels, as well as courses in the Greek and Roman drama, poetry, and culture. Karen works to promote Greek and Latin pedagogy at the high school and university levels through her editorial contributions to the American Classical League’s National Greek Exam, and also through her work with the yearly College Greek Exam. Her past research projects include a discussion of scatology in Aristophanes’ Wealth, as well as a production of that same play, in collaboration with director Artemis Preeshl, as part of the Loyola Department of Theatre Arts and Dance 2013 series of performances.  Her current scholarly projects include exploring the reception of the Classical past in Cormac McCarthy’s No Country for Old Men and unraveling the union of food and political rhetoric in Aristophanes’ Birds.

Sociology of Food in the Ancient World

Modern Reception of the Classical Past