Associate Professor of Religion and Education 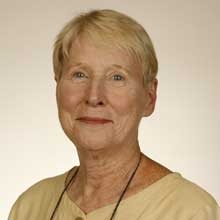 These latter courses are part of the Environmental Studies Program and reflect most clearly her research interest which focuses on integrating the wisdom of theology, ecology, and cosmology in a holistic practice of Religious Education. Her educational approach begins with the primary reality (the Universe) as the template for understanding anything and everything in the Universe. And proceeds from this to show that ecology derives from cosmology, anthropology derives from ecology, and theology derives from anthropology. In short, following Maria Montessori’s schema in which the learning process moves from whole to part and back to the whole.

A former Sister, Kathleen has taught in parochial and public schools and also served as Director of Religious Education for a Catholic parish in Central Florida before coming to Loyola in 1979. She initially was hired as Associate Director of the Catechetical and Pastoral Institute (now LIM) and soon thereafter moved into a faculty position which she has held ever since.

Kathleen holds a Doctorate in Religion and Education from Teachers College Columbia University (1986) and her Masters in Religious Education (1978) from Loyola.