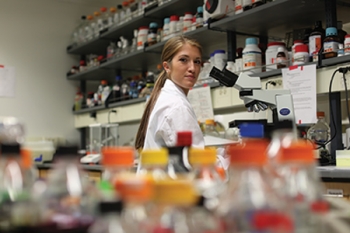 HOW SHE GOT THERE

Volunteered for March of Dimes starting at age 7; became a part of March of Dimes’ National Youth Council as a freshman at Loyola; almost attended school to be a physician’s assistant; decided on Loyola instead; discovered the passion to be a surgeon; pursued research in molecular signaling and blood-brain barriers in preterm babies

"At Loyola, I decided I wanted to be a doctor because I knew I was smart enough. Loyola was the only normal undergraduate program I applied to. All of the other schools were five-year master’s programs — fast tracks to a physician assistant degree. It turns out that Loyola was a great decision because here I decided I no longer wanted to be a PA."