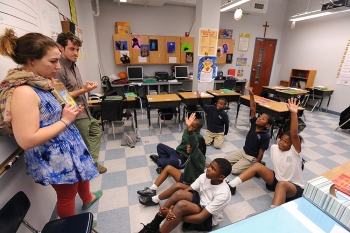 The Loyola Philosophy Department is pleased to announce the creation of “Big Ideas for Little Kids,” a philosophy education program aimed at elementary aged school children.  Once a week for a period of six weeks, six Loyola undergraduate students, along with Dr. Jon Altschul of the Philosophy Department, attended the Good Shepherd School to work with their third grade class of 15 children.  The class was divided into two groups, and each group began by reading a story centered on some philosophical theme.

The core belief of the program is that there is no age requirement to begin to learn how to think critically and philosophically.  Doing philosophy is nothing more than having a series of conversations about those “big ideas,” such as courage, beauty, respect for others, knowledge, and justice.  Thinking and talking philosophically does not require us all to have read what Aristotle or Descartes or Nietsche say on these matters.  Rather, we see these very ideas conveyed in stories like The Adventures of Frog and Toad, Emily’s Art, The Giving Tree, Morris the Moose, and The Wizard of Oz.  These childhood classics are entrenched with deep philosophical themes that are revealed through their plots and characters.  For example, for the unit on “respect for nature,” the children first read The Giving Tree and they then are asked:

"When the boy takes the tree's trunk to build a house, do you think it was right of him to do this?  Sure, the tree freely offered her trunk to the boy, but the boy gave her nothing in return.  Well, maybe the boy's companionship is all that the tree wanted, just like how you repay your parents by loving them.  What do you guys think about this?"

Or, for the unit on bravery, the children read “Dragons and Giants,” a story about Frog and Toad who have a series of encounters with things that might make people scared, like an avalanche and a giant snake.  After reading the story, a natural question arises, which is whether Frog and Toad were being brave throughout the story.  This discussion opens up into a more general conversation about just what it means to be brave.  “Does being brave mean that you aren’t scared?” we ask.  “Can you be brave even if you run away from a fight?  Who is someone in your life that you think is brave.  What makes that person brave?”

Working with third graders, it does not take a whole lot of prodding and asking from us teachers to get them talking.  In fact, this is the very point of “Big Ideas for Little Kids.”   We adopt a learner-centered education, in which the children teach themselves and each other.  Our job as instructors is merely to guide the discussion along so that the children formulate and express their own opinions while also offering reasons for why they think they are right.  The main objective of the program is to let the children learn how to play the game of giving and asking for reasons to back up whatever they or their peers say in a conversation. We believe that the key to a successful future life begins with knowing how to argue for what one wants or what one thinks is true.  Engaging in philosophical dialogue, more than anything else, cultivates and nurtures this very skill, which is why talking about those big ideas with these little kids is so important.

The Philosophy Department is looking for volunteers to help with “Big Ideas for Little Kids.”  Any Loyola student is welcome to participate, regardless of the number of philosophy classes already taken.  The only requirement is that you enjoy working with kids and are dedicated to making them smarter.