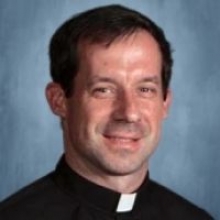 Jordan Jones is a Jesuit in formation, studying to become a Roman Catholic priest in the Society of Jesus. He joins Loyola University in 2022 having spent the last two years teaching and coaching at Regis Jesuit High School in Denver. These years of practical apostolic experience comprise a period of Jesuit formation known as “regency.” Jordan entered the Jesuits in 2015. Before working at Regis Jesuit in Denver he earned an M. A. in Philosophy from Saint Louis University.

Jordan is a native of New Orleans and a graduate of Jesuit High School. After college, he worked for 10 years as an infantry officer in the U.S. Marine Corps before entering the Jesuits. Jordan’s philosophical interests include ethics and the human person broadly speaking, with a more specific focus on Thomas Aquinas and hylomorphism. His M.A. thesis explored Thomas’ conception of the function of the organ of the human heart as it relates to the soul. Jordan will be teaching Philosophy of the Human Person.