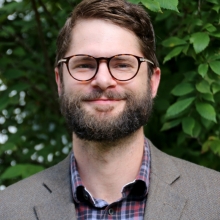 I primarily work on philosophical skepticism. But behind that work, lies a broader motivating question: what are the foundational norms of rationality and what do they imply? My projects in epistemology, logic, and the history of both of those disciplines all orbit around that broader question. Current research investigates the philosophical lesson, or moral, we ought to draw from the long recalcitrance of skeptical arguments. I am also working on a new account of the rational prohibition against circular reasoning. Some of my more historical work includes studies of the infamous Cartesian Circle and Aristotle’s early contributions to modal logic. I am editor of the “Skepticism” section on the research database philpapers.org. I am also the faculty advisor to Loyola’s chapter of Phi Sigma Tau, the philosophy honors society. Prior to coming to Loyola, I pursued doctoral studies at Saint Louis University under the direction of John Greco. I did an MA on Kant’s theoretical philosophy at Georgia State University. I taught ESL in Santiago, Chile, and I did my BA in philosophy at UNC Wilmington.