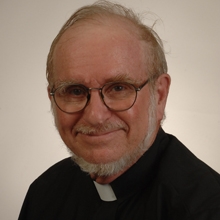 Fr. Rowntree was born in Lawrence, MA, and lived there and in Lowell, MA for eight years, hence his passion for the Boston Red Sox. He moved with his family to South Carolina in 1955. His father was Plant Chemist for Wellman Industries in Johnsonville, SC. Fr. Rowntree graduated from Johnsonville High School in May of 1961, and began his formation as a Jesuit in July of 1961 at St. Charles College, Grand Coteau, LA. He took vows as a Jesuit on July 31, 1963, and then did two years of humanities studies at St. Charles College. In 1965 he moved to Spring Hill College, Mobile, AL and graduated Summa Cum Laude in May 1967 with a B.A. in Philosophy and Classics. In the Fall of 1967 he began Ph.D. studies in philosophy at Fordham University, Bronx, NY. He wrote a doctoral dissertation, The University in Process: A Critical Study Based on Whitehead’s Philosophy under the direction of Dr. Robert C. Neville. He was awarded the Ph.D. in Philosophy in 1973. In Fall 1972, he began theology studies at the Weston Jesuit School of Theology in Cambridge, MA and was awarded an M.Div. “With Distinction,” in 1975. At Weston, he wrote an M.Div. thesis, “Communal Provision and Rawls: A Comparative Study of Recent Catholic Teaching on Distributive Justice.” He was ordained priest June 20, 1975. In 1975-76 he studied theological ethics at Harvard Divinity School and was awarded a Th.M. in Ethics in June, 1976.

Fr. Rowntree began his full-time teaching career at Loyola in 1976 as Assistant Professor and was promoted to Associate Professor in 1980. From 1981 to 1992 he directed the Jesuit Center for Academic Formation, which coordinated the studies of Jesuit Scholastics and Brothers attending Loyola. In 1993 he answered a call for volunteers begin a four-year integrated program of philosophy, humanities, and religious studies for English-speaking African Jesuit seminarians. Fr. Rowntree was one of the founding fathers of this program and Arrupe College, Harare, Zimbabwe. There he taught a variety of courses in ethics, political, and social philosophy. He returned to Loyola in 2001. In the Spring semester of 2006, he held the Donald I. MacLean Chair in the College of Arts and Sciences (a chair for visiting Jesuits) at St. Joseph’s University in Philadelphia.