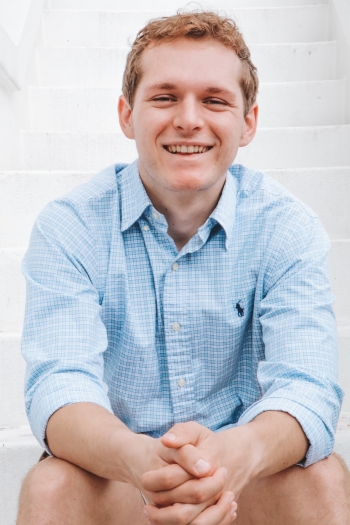 Zach Dowling, who received his Bachelor of Arts in Philosophy from Loyola University New Orleans in 2021, has received a Fulbright Fellowship.

Zach didn't know much about the Fulbright program during his time at Loyola. He said, "The extent of my knowledge came from the banners that hang on St. Charles Avenue, proclaiming that the university was a top producer of Fulbright scholars." He didn't think much about it again until I was graduating and beginning the process of trying to figure out my life, and perfecting the answers I'd give to people about what cool and exciting things were in store for me. However, he felt pretty aimless, unsure of what he wanted to do but knowing for certain that he wanted to do something more. He said, "The education I received at Loyola, from all departments, helped instill in me a passion for knowledge and exploration. This passion kept me discontented in the best way possible, I wanted to constantly be working towards something more meaningful." He gave special thanks to  Dr. Constance Mui, Dr. Eileen Doll, and Professor Angela Ramirez saying, "Not only did they provide me with letters of recommendation for the grant, but their guidance in both my courses and my life has been invaluable." He also wanted to thank Dr. Allison Edgren, as she offers help and guidance in the Fulbright application process.

He said he was often asked what he was going to do with a Philosophy Degree, and "For a while, I wasn't sure myself. I did know, however, that I was actually interested in something I was learning for once, and that was enough for me." He says he recommends anyone take philosophy courses strictly for the critical reading and writing development, which helped him tremendously in writing the many essays required for the Fulbright application. Philosophy also helped him to expand his thoughts on how the world works, how it should, and how he should think about it. He said, "Experiencing new cultures through travel parallels philosophy in this way, opening up my way of thinking and living in a state of relentless questioning."

As for the philosophy department here at Loyola, he said, "My time with Philosopher Kids, a service-learning program that provides after-school education for local elementary school students, proved to be the main basis for my application as an English teaching assistant." Giving him practical training for his role was a valuable experience Loyola was able to provide.

He also gave more thanks to our Philosophy Department professors saying, "I also want to thank several of the fantastic professors who helped me on my journey as a student, such as Dr. Leonard Kahn, Dr. Everett Fulmer, and Dr. Mark Gossiaux. I want to especially thank Dr. Constance Mui, my advisor and the professor who has had the greatest impact on my desire to learn."

The Philosophy Department wishes Zach well on his journey and in all of his future endeavors!