Dorothy Harrell Brown Distinguished Professor of English, Director of the Center for Editing and Publishing 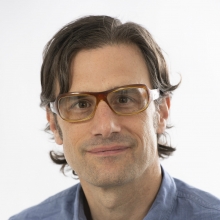 Christopher Schaberg is the founding co-editor of the book series Object Lessons, a public humanities venture that creates crossover publishing opportunities for a wide range of scholars and writers. The series is also one of the foundations of Loyola’s Center for Editing and Publishing, which Schaberg co-directs.

Schaberg’s scholarship merges public humanities inquiry with environmental criticism. His wide-angle books The Work of Literature In An Age of Post-Truth (2018), and Pedagogy of the Depressed (2022) are concerned with the value and practice of humanities teaching on a damaged planet. Schaberg’s 2019 Searching for the Anthropocene brings ecological questions to bear on far-flung aspects of contemporary culture. Fly-Fishing, publishing in March 2023 as part of Duke University Press’s Practices series, blends memoir and ecocritcism to demystify the titular activity.

A leading expert in the study of air travel, Schaberg has published four books on flight: The Textual Life of Airports: Reading the Culture of Flight (2012), The End of Airports (2015), Airportness: The Nature of Flight (2017), and Grounded: Perpetual Flight . . . and Then the Pandemic (2020). He also co-edited the nonfiction anthology Airplane Reading (2016), with Mark Yakich.

Schaberg’s writings appear frequently at public-facing venues such as The Atlantic, Los Angeles Review of Books, Slate, Sierra, Inside Higher Ed, and elsewhere.

His next book is called Adventure: An Argument for Limits.