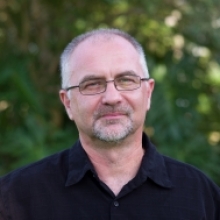 Professor Armin Kargol studied physics and mathematics at the University of Wroclaw in Poland and at Virginia Tech. He did postdoctoral work at the Institute for Mathematics and Its Applications at the University of Minnesota in Minneapolis and at Tulane University in New Orleans. Initially, his research was concerned with mathematical foundations of quantum mechanics, including semiclassical and Born-Oppenheimer approximations as well as C*-algebras of operators. Soon after completing his PhD, Prof. Kargol became interested in mathematical modeling of biological processes, in particular transport processes on a cellular level, as well as experimental studies of membrane transport processes. His research now concentrates on nonequilibrium properties of ion channels in cellular membranes. It involves ion channel electrophysiology, numerical simulations, and theoretical analysis of channel gating kinetics. Another area of his interest is the thermodynamics of membrane transport processes. Prof. Kargol leads a Biophysics Lab devoted to patch clamping studies on voltage-gated ion channels. His research group includes several undergraduate student researchers. Go to research page.