The Social Justice Scholarship program began in 1994 as an avenue through which the university could actualize its Jesuit tradition of academic excellence and the pursuit of social justice. Social Justice Scholarships are awarded to students who exhibit a high level of academic promise as well as a demonstrated commitment to community service and activism. Each student in the program performs 45 hours of community service and participates in numerous educational, social, and cultural activities each year. The program is administered through the Department of Sociology which has a strong commitment to the integration of research and social action.

The Social Justice Scholarship program began with an initial cohort of eight students which has now increased to an average of 15 students. The academic standing of each cohort of participants has strengthened over time in terms of grade point average and mean ACT scores.

Social Justice Scholars have contributed over 10,000 hours of their time to a number of service organizations and projects since the inception of the program. These activities have proven to be an excellent way to facilitate the expansion of service learning and research projects within the university. These service opportunities help students develop linkages between the knowledge gained in the classroom and experiential learning gained in the community.

There are approximately 15 current scholarship recipients whose social justice projects include tutoring adult learners attempting to pass their GED, working for the decriminalization of homelessness, mentoring children, assisting the homeless and hungry, developing recycling programs, and raising consciousness on campus about social justice issues ranging from food or Latin America, to the death penalty or racism. In addition to serving the New Orleans community, these students learn about themselves and are transformed in the process.

One of the most visible and essential ways Loyola maintains preeminence as a “Social Justice University” is through its support of the Social Justice Scholarship program.

"Never doubt that a small group of thoughtful citizens can change the world..." 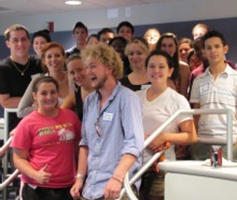