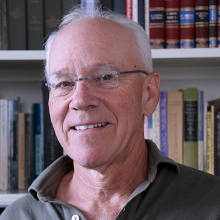 Denis R. Janz received his Ph.D. from St. Michael’s College in the University of Toronto in 1979. After coming to Loyola in that year, he served terms as Department Chair and Director of Graduate Studies. He was awarded a Provost Distinguished Professorship in 2000 and was promoted to Professor Emeritus in 2017.

He is author of Luther and Late Medieval Thomism (1983), Luther on Thomas Aquinas (1989), and World Christianity and Marxism (1998). He edited Three Reformation Catechisms (1982), and A Reformation Reader (1999 and 2008). He served as General Editor of Fortress Press’s prize-winning seven-volume People’s History of Christianity (2005-2008), and Series Editor of Fortress Press’s five-volume Historical Trajectories project (2016-2019).

Janz’s research and lecturing have taken him to some twenty countries around the world. In addition, he has held residential fellowships at the University of Louvain (1997); the Rockefeller Center in Bellagio (2001); The Tantur Institute for Ecumenical Studies in Jerusalem (2011); the Johannes a Lasco Bibliothek in Emden (2015); and the Fondatione per le Scienze Religiose Giovanni XXIII in Bologna (2016).