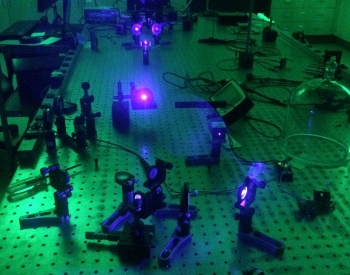 Experiments using light quanta – photons – have proven to be very effective probes of a large range of phenomena, including quantum entanglement. This phenomenon has long fascinated scientists, and exemplifies the mystery and ‘weirdness’ of quantum physics. It also points the way towards the possibility in the future of extremely powerful quantum computers.

In the Quantum Optics Lab in the Physics Department at Loyola University we have done a successful version of a test of Bell's Theorem using entangled photons.  Our results violate an inequality -- known as the Clauser, Horne, Shimony, Holt (CHSH) inequality -- to a high degree of confidence. These results are in agreement with the laws of quantum mechanics, but inconsistent with any 'hidden variable' extension which attempts to impose locality.

Students are involved in all aspects of the work, from putting together and aligning optical components, to building electronics, to using computers to acquire, analyze and model the data. We have automated most aspects of the experiment and are currently pursuing a variation of the initial experiment.