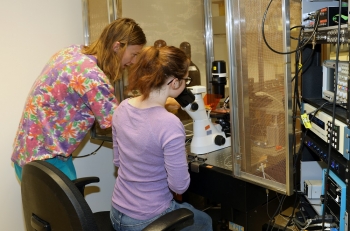 All living cells in order to survive and to perform their physiological functions continuously exchange various atoms and molecules with the extracellular medium. Of particular importance are ions such as sodium, potassium, or calcium. Their controlled exchange with the extracellular medium is crucial to action potentials in neurons, muscle contraction, etc. Since the cellular membrane is normally impermeable to ions, their exchange is facilitated by special proteins called the ion channels, which are embedded in the membrane and form gated microscopic pores.

The focus of our research is to better understand the function of these proteins and their nonequilibrium properties. We know they can detect certain environmental factors, such as changes in electric field, presence of cer

tain ligands or even mechanical stress, and can open or close in response to these factors (ion channel gating). This way they can control and regulate various physiological processes. We use the experimental technique of patch-clamping and recent advances in mathematics and statistical physics to better characterize and control the process of channel gating. We also look at the interaction of inorganic nanoparticles, e.g. multiferroic nanoparticles, with biological cells.

Current members of the lab are:

Recent publications from the Lab: