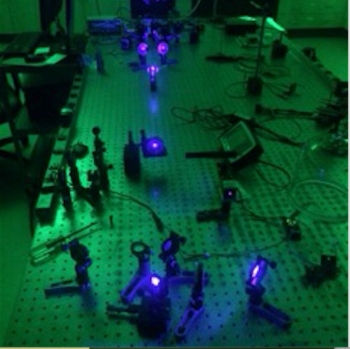 Loyola Physics students Cody Smith, Andrew Eddins and Kyra Woods have been working with Dr. Martin McHugh in his quantum optics lab in Monroe Hall over the last few semesters. This past April they were able to complete an experiment demonstrating one of the strangest properties of quantum physics – entanglement.

In a 1935 paper, Albert Einstein and colleagues showed that quantum mechanics predicts a ‘spooky action at a distance’ between two particles that are ‘entangled’ – meaning they are described by a single quantum mechanical state. Quantum mechanics says that the measurement of one particle is somehow linked to a property of the other, no matter how far apart they are. Einstein took this as a strong indication that quantum theory must be missing something – it couldn’t be the most complete picture of physical reality, because such an action at a distance should not be possible. So-called ‘hidden variable’ theories were proposed as a potential way to banish the spooky behavior and have a complete theory.

But quantum mechanics has withstood the test of time. An important step came in 1964, when Irish physicist John Bell showed that experiments could be performed that could rule out the hidden variable theories, and show that quantum mechanics is the full picture, and therefore the ‘spooky action at a distance’ is real.

Our students in the quantum optics lab have realized such a ‘Bell’s Theorem’ experiment using light. Particles of light – photons – are created as entangled pairs and then measurements are made of their polarization.  In quantum physics a photon does not have a particular polarization until it is measured, but once the measurement is made it ‘collapses’ into a particular state, and so does its entangled partner. In a hidden variable theory, the photon would have its polarization before it is measured (even if we don’t know how to predict what it would be). The statistics of what the Loyola group measured in the lab are inconsistent with this ‘hidden variable’ scenario. But their measurements are completely consistent with the predictions of quantum mechanics.

Scientists and researchers around the world are working to understand and exploit this mysterious property of entanglement – in such exciting areas as quantum cryptography and quantum computing. Loyola students are part of that adventure.