Cole Green (PHYS '20) is the recipient of multiple awards. 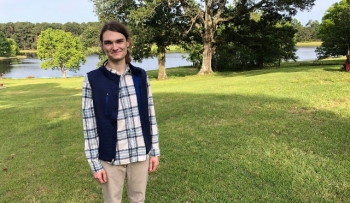 Cole Green is the recipient of multiple awards! He received the Reverend Percy A. Roy, S.J., Memorial Award. This award is given to the candidate for graduation in the College of Arts and Sciences who has achieved the highest academic record for their entire four-year curriculum at Loyola.  It was established in the early 1950s by the Loyola University Alumni Association in memory of former Loyola President, The Reverend Percy Roy of the Society of Jesus.

Also from the College of Arts and Sciences, he received the Mullahy/Faust award for the Outstanding student in the Physical Sciences. This award goes to a student selected from Chemistry, Mathematics or Physics.

From the Department of Physics, he received the Rev. Francis A. Benedetto, S.J., Award for Excellence in Physics. This award emphasizes scholarship and research achievement in physics and is given by the faculty of the Physics Department as a token of confidence and encouragement.