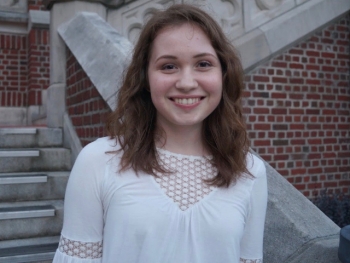 Ariel Hall (PHYS '20) received two awards. She received the Rev. Karl A. Maring, S.J., Award.
This award is presented to students who have demonstrated scholarship in physics and who have, by their knowledge and enthusiasm, encouraged others in the study of physics. The award is named in honor of Father Maring, a former professor.

Ariel was also co-awarded the Rev. John H. Mullahy, S.J. Award for Outstanding Achievement in the Sciences. This award is given to the graduating student in the sciences who best fulfills the ideals of outstanding academic achievement, personal integrity, generosity of spirit, and leadership that Father Mullahy consistently attempted to elicit from his students.