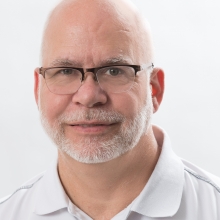 Andrew Wolfe spent three decades building software products and applications before bringing that experience to higher education.  He has developed and applied cybersecurity principles and techniques since working on Defense intelligence systems in the 1980’s.  Wolfe was also database architect on several projects, including the Oracle Configurator which was a Gartner Magic Quadrant™ product during while he worked on it. Wolfe has worked with major commercial and open-source database management systems in Windows, Linux, and other environments.  Andrew Wolfe’s academic career began part-time in the late 2000’s, teaching a graduate course on database security for Boston University Metropolitan College.  BU appointed him as permanent faculty in 2016, then in 2018 he joined Loyola as Visiting Assistant Professor.  Professor Wolfe developed Loyola's Cybersecurity degree program, which officially starts Fall 2020.

COSC A211 - Introduction to Programming 1

COSC A270 - Introduction to Relational Databases

COSC A294 - Introduction to Cybersecurity