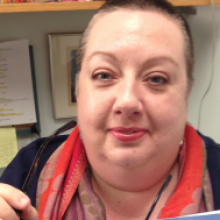 Karen Rosenbecker received her Ph.D. in Classics from the University of Pittsburgh, specializing in Greek Old Comedy and Food Studies. She researches and writes on a series of topics ranging from food in the ancient world, to the use of digital technology in ancient language pedagogy, to performance studies in Greek theater. She has published on the union of scatophagy and economic collapse in Aristophanes’ Wealth (Just Desserts: Reversals of Fortune, Feces, Flatus, and Food in Aristophanes’ Wealth, Harvard Studies in Classical Philology, 2015) and on the reception of Athenian ideals of civic responsibility in Cormac McCarthy (“American Furies: Justice in Cormac McCarthy’s No Country for Old Men and Aeschylus’ Oresteia Trilogy.” Amphora, 2018). Her interest in incorporating digital technology in the ancient language classroom led to the creation of first-of-their-kind animated tutorials for the textbook series From Alpha to Omega (With Brian Sullivan, Screen Cap Video Tutorials for “From Alpha to Omega: A Beginning Course in Classical Greek”, Focus Publishing/R. Pullins Co., 2013), as well an article (With Brian Sullivan. “‘Greeking Out’: Creating Digital Tutorials and Support Materials for Beginners,” Teaching Classical Languages 5.2, 2014) and several conference presentations on creating digital materials for the ancient language classroom. She has translated and adapted Aristophanes’ Wealth for the stage, and produced two performances of the play (Loyola Montage Fine and Performing Arts Series-- directed by Artemis Preeshl, January 30- February 2, 2013 and the Committee for Ancient and Modern Performance at the 146th Annual Meeting of the Society for Classical Studies, 2015), as well as writing articles about performance studies (“Pre-Modern Austerity Measures: The Capricious Economy of Aristophanes’ Wealth”. The Mercurian 6.1, 2016; With Artemis Preeshl “Currency Exchange: Staging Aristophanes’ Wealth in New Orleans.” Didaskalia 11.5, 2015).

Karen teaches a wide variety of classes ranging from ancient Greek and Latin language instruction at all levels, to surveys of Greco-Roman literature and culture, to special topics like feasts and dining in antiquity and representations of women in ancient literature. She is proud to have received the Loyola University New Orleans College of Humanities and Natural Sciences Excellence in Teaching Award (2016), the Society for Classical Studies Award for Excellence in College Teaching (2015-2016), and the Classical Association of the Middle West and South Award for Excellence in College Teaching (2014-2015).

Her current writing projects include an article on cooking in Aristophanes’ Birds and uses of Digital Storytelling in the beginning Latin classroom.

Sociology of Food in the Ancient World

Modern Reception of the Classical Past