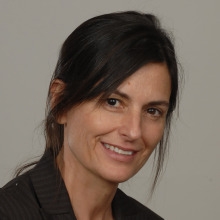 Isabel Durocher received her Ph.D. from Tulane University in 2002 with a concentration in Twentieth and Nineteenth Century Latin American Literature and with a secondary concentration in Twentieth Century Iberian Literature and Film. She has also studied in the University of Barcelona, Spain. She has given scholarly papers at various national and international conferences. Her interests include Transatlantic Studies, the Fantastic genre, Surrealism in Latin America and Spain, Film Studies, and the visual arts. She teaches all areas and levels of Latin American Literature, Latin American and Peninsular civilization and culture, Latin American, Chicano and Iberian Film, and introductory, intermediate and advanced Spanish Language classes at Loyola University New Orleans.

Dr. Durocher is an advisor for Spanish Minors, and the Chair-Adviser and an Honorary Member of the National Spanish Honors Society Sigma Delta Pi at Loyola University New Orleans.

Dr. Durocher received the 2016 Excellence in Teaching Award from the College of Humanities and Natural Sciences.