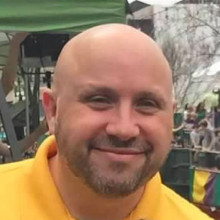 Faimon A. Roberts III has a B.A. in History from Louisiana Tech University, a TH.M. with an emphasis in the Old Testament from Dallas Theological Seminary, and an M.Phil in Cuneiform Studies from the University of Oxford (U.K.), where he also completed some doctoral work. At Loyola, Faimon enjoys teaching classes in the history, culture and literature of the Ancient Near East as well as a class on tyranny throughout history. His interests relate to ancient Iraq, especially the culture and history of the Akkadians, Sumerians, Babylonians, Assyrians, and Egyptians. He also enjoys ancient languages, including Hebrew, Akkadian and Sumerian.

Away from Loyola, he is a newspaper reporter who enjoys writing the first draft of history in and around New Orleans.

B.A. in History, Louisiana Tech University: TH.M. with an emphasis in the Old Testament, Dallas Theological Seminary; M.Phil in Cuneiform Studies, the University of Oxford (U.K.)

Faimon enjoys teaching classes on the Ancient Near East, Ancient Egypt and tyranny throughout history.