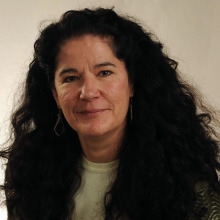 In 2009, Dr. Anderson won a Marquette Fellowship for her work on the Mexican artist Oliverio Hinojosa.