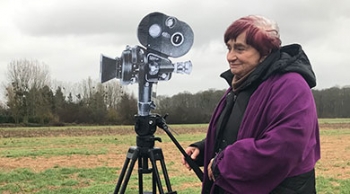 The Loyola Society for Francophone Cultures wraps up its Tournees Film Festival on Thurs., April 15 at 7 p.m. with Varda by Agnes, a film about the mother of French New Wave and institution of the French cinema, director Agnes Varda. Taking a seat on a theatre stage, Varda uses photos and film excerpts to provide an insight into her unorthodox oeuvre.

The Tournées Film Festival is a program which aims to bring French cinema to American colleges and university campuses. The Loyola Tournees Film Festival has run over the last six weeks and has screened internationally acclaimed films including Portrait of a Lady on Fire, All is Forgiven, and Joan of Arc. There will be no charge for the final screening. This event is open to the Loyola Community.

Please join the Loyola Society for Francophone Cultures as it wraps up its Tournees Film Festival with this extraordinary film: