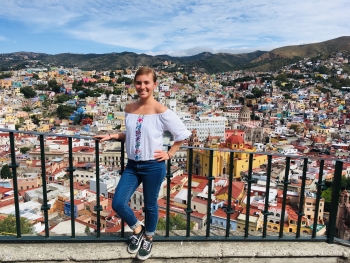 Latin American Studies and sociology major Sasha Solano-McDaniel knew her final research project for her History of Food in America class last fall would be uploaded on Loyola University’s Documentary and Oral History Studio website, but she didn’t know it would be so well received by Loyola’s Languages and Cultures Department.  Says Solano-McDaniel of the project, “Our task was to create an article stemming from a historical menu in 1930’s America.” The result was an historical look at the formation of Mexican-American cuisine.

The research project for her History of Food in America course may have been the origin of the article, but Solano-McDaniel says it was a longtime coming. “I have been looking for ways to express the intersection of my culture, studies and experiences, after returning from Mexico in 2019 where I studied culinary anthropology and Mexican gastronomic culture,” she says. “This project really was exciting for me as it pulled together my studies in Sociology and Latin American studies, my passion for food, and my identity as a California Chicana, through telling the story of how the beloved tamale (and many iterations in between) came to be,” Solano-McDaniel explains.  The senior adds, “However, I have found that writing this article has been just the beginning of my personal and academic project to explore how common place objects, especially food, tell the stories of the connection between our culture, history, and ultimately ourselves, if we just look close enough.”

Here is the link to Sasha Solano-McDaniel’s article, “From Cup Tamales to Tamale Pie: A Historical Look at the Formation of Mexican-American Cuisine,” on Loyola University’s Documentary and Oral History website: