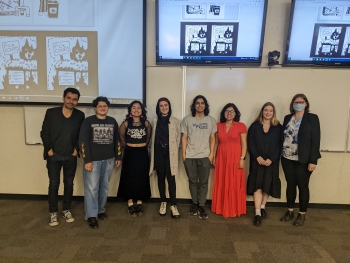 Here is the complete Capstone program listing the six students who participated this year and the titles of their projects.

"Muslims and Hispanic Cultures: From Andalusia to the Palestinian Diaspora" by Sabah Bashi, Latin American Studies

“The Role of French Identity in the Socio-Economic Problems of Marseille” by Catherine Boudreaux, French

“The World of Jacques Tati” by Christophe Cogerino, French

“France and the Fight Against Climate Change” by Ella Cogerino, French