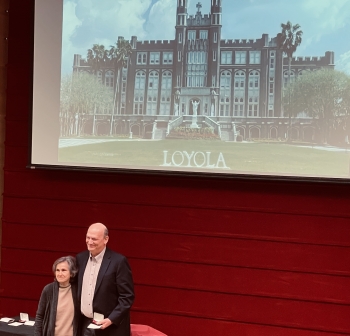 ENVA's Dr. Paul Barnes was recently awarded the Jon T. Altschul Senate Award for Excellence in Community Engagement. He received this award for his work with the United Nations Environment Effects Panel (UNEP) in support of the Montreal Protocol.The EEAP consists of about 50 scientists from around the world and provides regular reports on the state of the science on the effects of ozone depletion and climate change on human health and the environment.  As the lead author of the Terrestrial Ecosystems Working Group within the EEAP, Dr. Barnes works with a dozen other scientists to assess the interactive effects of changes in stratospheric ozone, ultraviolet radiation, and climate on terrestrial ecosystems and biogeochemical cycles. This Working Group just finalized a major Quadrennial Report that will be published early in 2023. In addition, Dr. Barnes also serves as one of 3 Co-Chairs of the EEAP. In this capacity, he represents the EEAP at the annual Meeting of the Parties (MOP) where he interacts with the Co-Chairs of the other UNEP scientific assessment panels and presents summary findings to policymakers.