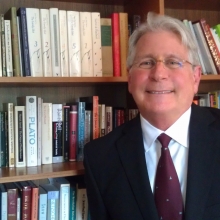 Dr. White’s research has appeared in Social Theory and Practice, International Studies in Philosophy, The Journal of Thought, The Journal of Information Technology Impact, and Bulletin de la Societe Americaine de Philosophie de Langue Francaise.  He is currently at work on developing new models for community organizing and community empowerment in an age of globalization.  Before coming to Loyola, Dr. White served as a community and labor relations expert for employee organizations in California, Texas, and Louisiana.

History of Political Thought I