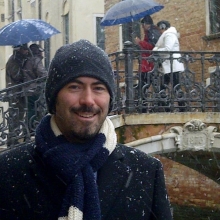 Tomás Martin received his doctorate in French and Comparative Literature from the Louisiana State University. His research concerns the fourteenth century Venice Four manuscript of the Old French epic poem, La Chanson de Roland. Commissioned by the Ducal Gonzaga family of Mantua, the manuscript is composed in an obscure literary language known as Franco-Venetian. Through this blend of Old French and medieval Venetian dialects, the poet presents a divergent literary iteration of Charlemagne’s eighth century campaign in Spain, and the loss of the epic hero Roland at the Battle of Roncesvalles. Since 1734, the manuscript has been a notable holding of the Marciana Library in Venice, Italy, where Dr. Martin conducts his research.

Tomás Martin graduated from the College of the Holy Cross, a Jesuit liberal arts college in Massachusetts. Through the College, he spent a year studying the History of Art and Architecture at the University of Strasbourg in France.

Prior to joining the faculty of the Department of Languages and Cultures, Dr. Martin has held teaching positions at Yale University, Columbia University, the Rassias Foundation of Dartmouth College, and the Trevor Day School in New York.