Epidemiology and Control of Chagas Disease 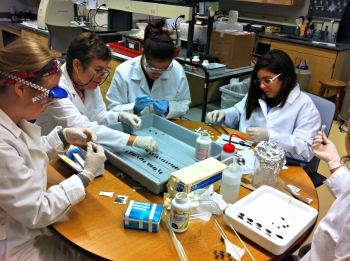 Dr. Patricia Dorn and a team of undergraduate researchers focus on interrupting transmission of Chagas disease, a leading cause of heart disease in Latin America, caused by the parasite Trypanosoma cruzi, and transmitted by kissing bugs. Through investigating the kissing bugs, they improve control methods and prevent people from becoming infected with this deadly parasite.

Chagas disease is contracted when infected kissing bugs bite humans or animals, opening a wound and producing contaminated waste that enters the wound or mucous membranes and ultimately into the bloodstream. Dorn says reactions to the bite itself can range from slight to extremely severe allergic reactions called anaphylaxis.

Once it enters the bloodstream, the Chagas parasite attacks muscle tissue, especially the heart, and may not be detected for 10 to 20 years. By that time, Dorn says the damage is done and the treatment options are limited.

Dorn and her student researchers have traveled to Guatemala to hunt for the kissing bugs in homes, caves and other locations in order to conduct the groundbreaking research. They've also spent time in Latin America creating educational films to educate villagers with step-by-step instructions for implementing an ecohealth approach to stopping the transmission of the deadly tropical disease. In Latin America, 7 to 8 million people are infected with the Chagas parasite and 30 to 40 percent of those are doomed to life-threatening heart disease.

Recent reserach conducted by the team shows people in the Southwestern U.S. are encountering the “Kissing bugs” that harbor the parasite that causes Chagas disease.

Although the bugs don’t infect humans at the same rate as they do in Latin America, the free-roaming kissing bugs in the desert Southwest frequently feed on humans outside the confines of their homes. For example, in a recent test eight bugs tested had all fed on humans and three of these were also infected with the Chagas-causing parasite Dorn and her team study—something the scientists can tell by looking at the DNA in the bugs’ abdomens. Because some of the bugs harbor the deadly parasite, this could represent an unrecognized potential for transmission of Chagas disease in the U.S.